#OTWOL …. What have you done to me? I never expected I’ll be hooked to this Filipino series by ABS-CBN which airs from Monday to Friday at prime time.  Honestly, I’ve never followed any series, be it American, British, Taiwanese, Chinese, Korean or Filipino, real time. But OTWOL is different. Why? Is it due to the incredible chemistry between James Reid and Nadine Lustre? The awesome direction of Tonet Jadaone and Jojo Saguin? Or is it because of the storyline which is realistic and up with the times? I can’t fully grasp the formula of its success. Perhaps everything blends in perfectly but whatever it is, people are going gaga over this series and are clamoring for more.

This summer, McDonald’s is offering a two-hour, week-long kiddie workshop for kids ages 5 to 12. It’s a work-filled/fun-filled activity to acquaint kids behind the counter of one of the biggest fastfood chains in the world. They get to greet the customers like ushers/usherettes, walk around the food preparation area, and observe at the counter. It’s a different experience for the kids since they are in the loop of the working community, and will have even a faint idea of “Work”.

Day 1:
– greeting the customers (Hi! Welcome to McDonald’s/Thank you for coming! See us again!)
– kitchen tour
– behind the counter (got to serve the customers like getting ketchup, tissues, soda, etc.)
– able to observe the cashiers-at-work
– learning the McDonald’s kids song

Day 2:
– back to behind the counter
– art time (apron painting)

Day 4:
– practice the dance craze
– greetings and behind the counter 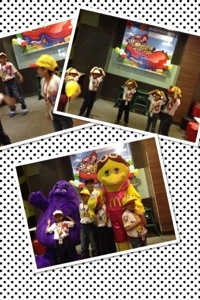 It’s a simple yet fun summer activity the kids will surely enjoy. But the most important thing is they learn to deal with people and other kids from all walks of life which will hone their confidence and people skills. These will help them be better adults when they grow up.

Rain during summer.
Thunderstorm in the clear sky.
Turmoil inside, sunny outside.
Is there a rainbow?
Pretensions.
Fake.
Real!

It started out as a rainy day outing. There was an unexpected storm in the country, although far from our destination, it couldn’t be helped that we were affected. There was not much to do, swimming was supposed to be the main activity. Now, all activities should be inside the hotel or the hotel room. I thought it’s going to remain gloomy for the rest of the trip. Perhaps the name of the resort, which is Thunderbird Resort, ‘thunder’ perfectly wraps up the first day experience.

Still, the fun time should not be ruined by a simple storm. It was the perfect time to relax, chit-chat, and play some indoor games. A massage and spa were the priority. For some, going to the casino was an experience too especially for first-timers. Just hold on to your money because once you get started, it might be hard to stop. Your funds are already dwindling and don’t even notice it. It’s a good place though to get “free” drinks or food (no need to pay and unlimited, as long as you are playing). One thing you’re also getting for free will be the cigarette smoke smell. That’s the casino perfume 🙂

The following day was much better. Since the storm had passed, the sun was already out and very inviting. We were able to go to the driving range, and hit some balls (no pun intended). Observed some weekend golfers from a distance. And walked around, took pictures, inhaled the fresh air for the much needed oxygen refill.

Finally, it’s time to swim. Tried out their kiddie pool (hahaha!). It was good enough, the kids won’t drown. It was also safe since there was a lifeguard in the area. My only complaint was the water was too cold. It would have been much better if it was a heated pool. The kids would love it too. I tried the adult pool next. Same complaint on the water temperature and it was deep. Lastly, the jacuzzi… Now, this is the life! So soothing and relaxing! Hypnotized by the view, it was so easy to fall asleep.

Overall, our stay was good though I would suggest that the minimum stay should be 3 days and 2 nights for complete relaxation, especially if you went drinking and had a hangover on the first night. It’s also good for a 1 day trip since it’s not far from the city. It’s a perfect destination specially for golfers and families. 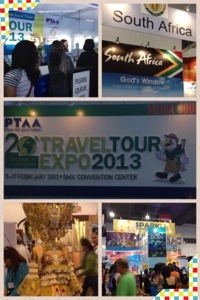 Fun and excitement…the emotions I felt while walking around SMX Convention Center at MOA, to attend the Travel Tour Expo 2013. It was a sight to see with so many people lining up booking their flights for domestic and international travel destinations. I thought people are hard up these days? How come there are long lines especially at Philippine Airlines?

Traveling these days is not anymore considered an expense, but rather an enriching experience. Whether it be local or abroad, it’s a great way to learn our and other countries’ cultures, relieves stress (considering of course that one’s flight and accommodations went on smoothly), have fun, and post great and picturesque photos on one’s Facebook account. I’m sure a lot are familiar with the saying “Work Hard! Play Hard!”, and a lot are agreeing considering the pressures we go through in our daily grind.

It has become easier and convenient (and cheaper) to travel. Thanks to technology, we have direct access to flight bookings and hotel reservations via the Internet. We can already create our itinerary and check out places prior to landing. We have become more adventurous!

Very adventurous indeed specifically with our spending. I just hope these travel expenses are all calculated. It should not go beyond our means, and won’t cause a heart attack when we receive our credit card bills. We just need to be wise because we also have to set aside funds for our retirement to make it also an enriching experience.

Sitting inside the coffee shop, staring at the world outside. Time passes slowly while I sit here and do nothing. It feels so good to have a me moment with no worries, noisy household, phone ringing or someone buzzing. No one can find me and I’m alone for a moment. I miss this and loving every second of it.

The relics of St. Therese of the Child Jesus arrived in the Philippines last December 15, 2012 for a four-month tour in the country. I anticipated her return since the last time she was here was in 2008, during which my mom was undergoing a serious operation, and I was praying for her recovery. I was a witness to an answered prayer.

It didn’t take long to find out her schedule. Thanks to our social networking sites, I was able to see her at The Chapel of Virgen delos Remedios in Clark, Pampanga. Unfortunately, I was not able to make it to the mass since I came all the way from Manila, but nevertheless, the Holy presence was so strong I found solace in the silence of the church. I think she meant it to be that way so I’ll be able to have a one-on-one session with her without the chaos of the world outside. I can’t explain why I felt like crying while entering the church. My feet were hurrying me to go and touch the relic once more. I guess that’s how it is when one is within its Holiness. I’m so privileged to have felt it.

It’s going to take a couple more years before she will be back. And once again, I’ll be anticipating. As of this time, she is touring more areas in the country and I am sure more people will be touched and changed by her. It’s all about love and faith.